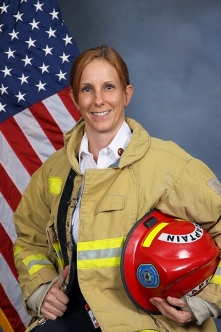 Congratulations to Colleen O’Neill for Winning the June 2017 Barefoot Writing Challenge! (Your $100 prize is on its way!)

The Challenge was to write an essay that answered this prompt:

Tell us about an accomplishment or event, formal or informal, that marked your transition from childhood to adulthood within your culture, community, or family.

Colleen shared the heartwarming story of how she followed in her father’s footsteps to a career that wasn’t always easy… enjoy her story:

As the front bay doors flew open on our little Matchbox fire station, out came a few beat-up fire engines, rolling down the ramp and out across the living room floor, on their way to the next “fire” across town. Loudly, my brother and I would make siren noises, announce our on-scene status of the fire, and position our Matchbox fire engines in just the right place around the “burning” couch – much to our mother’s dismay.

Dad was a career, and a volunteer, firefighter. Our kitchen reverberated with the dispatches of call after call from the scanner positioned on top the refrigerator, day in and day out. Hearing station tones, dispatches for fires and heart attacks, and seeing him run to the door to jump in his truck to go save a neighbor in need – well, that just became all our family ever knew.

Apples, as the saying goes, never tend to fall far from the tree. Such was the case in the O’Neill household. My brother and I counted the years, then months, before we were old enough to join the volunteer fire station in our town. Back then, we only had to be 16! High school kids, not old enough to vote and certainly not old enough to drink alcohol, began donning protective gear with self-contained breathing apparatuses – learning how to become firefighters.

This 16-year-old kid, all 98 pounds soaking wet of me, had just leapt from the Matchbox fire station in the living room to the real thing about a mile away from home. I was anxious, nervous, proud, and excited beyond belief, all rolled into one teenage emotion. As they say, things just got real! Although my driver’s license may have shown me to be 16 years old, my new responsibilities beckoned me to add years to my soul.

I learned so very much from those early days of volunteering. Not all of it was good. There were more than a few of those “old salty guys” who thought that I had zero business being in a fire station, much less fighting fire. I had to prove myself each and every day, and on every single call. It didn’t always go well – the call, or my performance. My dad was my biggest fan and supporter, so I never lost my faith in my ability to learn and get better at my chosen profession. Eight years after taking my first step onto a fire engine for a real incident, I was hired as a professional firefighter in the same county in which I volunteered. Today, I have achieved the rank of Captain.

Those early years of paving my route to success do not go unappreciated. My dad has passed away, but he lived to see me promoted to Captain – and even pinned my new badge on me at the promotional ceremony. Beaming with pride, he stood tall next to his little girl who started her career playing with Matchbox fire engines all those years ago, but who became what he always knew I could. Thank God for my Dad, and Matchbox fire stations!