Congratulations to Paulette Allickson for Winning the March 2020 Barefoot Writing Challenge! (Your $100 prize is on its way!)

The challenge was to write an essay in response to this prompt:

Do you have a good luck charm? Share the story behind it.

I never used to believe in good luck charms. As far as I was concerned, you made your own luck.

Then one Christmas Mom gave me a little silver angel. It was meant to clip onto the car’s visor to protect you while you were driving.

Now, I’d never been in so much as a fender bender in 20-plus years of driving. I was an excellent and careful driver, and I didn’t need a charm to keep me safe. I kept myself safe. But to please Mom (and since no cute little bunny had had to sacrifice a limb!), I clipped the angel to my visor and promptly forgot about it.

Until one day, about a year later, when I was driving to work. It had snowed heavily the day before, but the snowplows had been out clearing the roads. And I was fully confident in my winter driving skills.

Suddenly, I hit a patch of icy slush. My car went into an uncontrollable spin, sliding rapidly across four lanes of highway, barely missing smashing into other cars. Panicked, I stomped on the brake — the worst thing I could’ve done, and I knew it. But it was a gut reaction.

And then it got worse — considerably worse — as I found myself sliding helplessly into the path of an oncoming snowplow (which in Minnesota are massive 30-ton behemoths, built to clear upward of a foot of snow from a single storm).

But somehow, with just inches to spare, I missed colliding with the snowplow. I ended up on the shoulder, where my car finally came to a stop after sliding — rather gently, really — into a large snowdrift.

It felt like hours had passed… but in reality, it was just seconds.

The snowplow driver, who’d pulled up behind me, ran up to my car.

“Are you all right? Are you hurt?” he asked.

“I couldn’t stop!” he exclaimed, voice shaking. “I thought I was going to hit you!”

He opened the door and carefully helped me out of the car. My legs were weak… but I could stand. My hands were shaking… but I could move all my fingers. I turned my head from side to side… and there was no neck pain.

I had escaped what could’ve been, at best, serious injury and a mangled car.

The snowplow driver hugged me and said, “Ma’am, you nearly gave me a heart attack! Your guardian angel was surely watching over you today.”

As I sat back down in the car, I thought about the driver’s words. I reached up and touched my little silver angel. “Thanks, Mom,” I murmured.

My good luck charm, my guardian angel, has been with me now through four cars over the ensuing many years.

I became a believer that day. 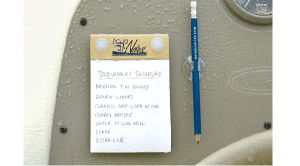 AquaNotes – “No More Great Ideas Down the Drain!”

Should I Tell My Clients If I Go On Vacation?