You are at:Home»Cool Tools»AquaNotes – “No More Great Ideas Down the Drain!”
By The Barefoot Writer on May 1, 2014 Cool Tools 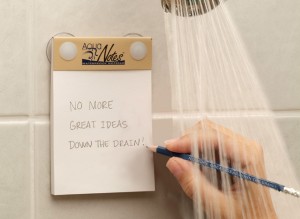 Ever notice how the best ideas come to you in unlikely places — when you’re nowhere near your computer? Like when you’re in the middle of a steaming hot, soap-sudsy shower?

You’re not alone. Lots of writers credit the shower as a top idea-generator. Maybe the “white noise” from the rush of water makes concentration easier. Or maybe getting out from behind your computer to relax under a jet stream takes the stress out of writing and gets your mental wheels moving again.

It could even be the physical act of massaging your head (and by extension, your brain). Or the fact that taking a shower wakes you up and makes you alert. It opens your pores … and therefore your mind.

At any rate, the tingling blast from the shower head and subsequent relaxation that follows is one of the most effective ways to prompt Big Ideas. But there’s nothing more frustrating than tapping your next great idea — and having nowhere to write it down!

Fortunately, we just discovered AquaNotes, the waterproof notepad. It hangs in your shower via suction cup along with a pencil. Water droplets roll right off the paper but your hand-written message stays clear.

So the next time you get a burst of inspiration in the shower, you’ll be able to capture it immediately. That way, when you’re back in front of your computer, refreshed and recharged, it’s a snap to capitalize on your shower-prompted creativity.