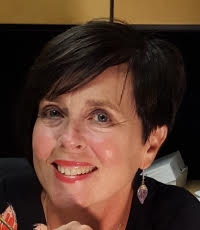 Congratulations to Holly Helscher for Winning the December 2016 Barefoot Writing Challenge! (Your $100 prize is on its way!)

The Challenge was to write an essay that answered this question:

You have the chance to go back in time and give advice to yourself when you were just beginning as a writer. What will you tell yourself?

Holly shared an important lesson learned about moving forward as a writer despite a stinging setback. Enjoy her winning submission:

“Give up. Your writing is hackneyed. Keep your day job.”

The peer reviewer’s words were ice picks to my heart. Decimated, I shut down my word processor. I’d known all along I was a fraud. Tom, this particular peer reviewer, confirmed it.

I grieved those words for three years. In that time, I played computerized video games and surfed the Web. But Tom’s words whispered to me from behind the computer screen, mocking me even when I wrote an email.

Then one day when cleaning out my basement, I stumbled across a story my son had written in fourth grade. He’d titled it, “The Haunted Hockey Team.” It was handwritten in block letters and then stapled inside a red construction paper cover. On top of the cover he’d drawn ghostly hockey players. I stopped cleaning, plopped on the gritty concrete floor, and read it anew.

In the stillness of stark basement walls, I laughed out loud when I read a long-ago favorite passage. “Meet Joe Williams, the accountant. He writes the checks.”

At the end of the story, Anthony Felsen, my son’s teacher, had scribbled, Creative. Well done. Like always, Felsen’s other comments were kind and generous, yet included where writing could be better. Always energized by his positive approach, my son wrote more and more. And got better and better. It was easy to understand. It’s because Felsen never viewed any fourth-grade writing as hackneyed. Or even immature. He knew it held promise and sometimes inspiration. And maybe someone’s dream.

I closed the faded red cover in my lap, burdened with insight. I’d trapped myself in a haunted ice rink of my own making. Sure, I had a lot to learn about writing. And first drafts are always awful. So why did I still believe this Tom stranger? Not even the course instructor had said anything like the reviewer had said. I was living a line out of Pretty Woman. “The bad stuff is easier to believe.”

I never finished cleaning the basement that day. Instead, I signed up for another writing course. And since then, I’ve never given up writing. I’ve gotten a lot better. And in the process, I made sure I learned the art of critiquing. Because it is an art.

I wasted so many years. Had I been a good mentor to myself, I would have said what I now tell writers starting out, “Feedback may always sting. So set it aside for a day or two until you’re ready to read it. Then, if three or more people mention the same thing, chances are good they’re right. So change it. Don’t fear feedback. Fear never becoming a writer. And remember, not everyone understands how to critique with grace and courtesy. When you keep that in mind, unkind comments won’t haunt you.”

Tom? He’s still around. Recently, he sent me a LinkedIn invitation. I deleted it.

Feedly – A Quick and Easy Way to Satisfy Your Information Appetite

How to Use Your Existing Network to Find Freelance Writing Clients

How Standing Improves Your Health and Writing Career