Congratulations to B. Lorie Dixon for Winning the January 2019 Barefoot Writing Challenge! (Your $100 prize is on its way!)

“Ten, nine, eight,” the crowd chanted from the next room.

“Oh God, what have I done?” I asked my reflection in the bathroom mirror. There was no taking it back now.

“Seven, six, five,” they yelled louder as the countdown slowly built up, reaching a fevered pitch.

How could I have let that little bit of information slip out?  It would have been better to just give a generic answer like “lose weight” or “meditate more.”

I shouldn’t have come to my cousin’s New Year’s Eve party blowout. When she had asked, though, I couldn’t think of an excuse to get out of it. I mean, how many times can you say you have to take the dog to the vet.

So I agreed to attend.

It had started off okay, with guests crowding into the house, talking excitedly as they caught up with each other’s lives.

Tables were filled with delicious food, and a bartender served unlimited alcohol. Which is where my problem began.

I rarely drink, and when I do, I limit myself to one. But that night, I had thrown caution to the wind and snagged quite a few of those pretty umbrella drinks. I didn’t realize those small drinks packed such a big wallop.

It was after this that my cousin announced that she wanted each guest to share one resolution for the New Year. We were to speak it into existence.

At that moment, my alcohol-loosened tongue betrayed me. I blurted out, “I’m going to pursue writing full-time.”

I had never confessed that in front of people. While most would not remember much from the night, someone would. And now they would hold me accountable.

I escaped into the bathroom as soon as the words left my mouth.

I took a deep breath and gripped the sides of the sink as I looked in the mirror.

I felt a sense of calm come over me and knew I had made the right decision.

Smiling, I went back to the party to celebrate the New Year and my new writer’s life!

How Standing Improves Your Health and Writing Career 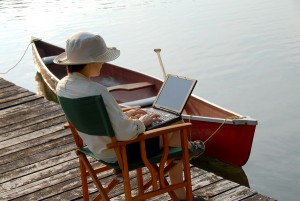