Congratulations to Deborah Grow for Winning the January 2020 Barefoot Writing Challenge! (Your $100 prize is on its way!)

How do you celebrate New Year’s?

Deborah wrote a lively account about celebrating New Year’s on the other side of the world from where she was born. Enjoy her winning submission:

I thought it was strange at the time, but now, after living in Japan for nearly 19 years, I think I have come to understand Japanese-style New Year’s Eve.

Now I too spend New Year’s Eve cleaning my house. This year felt even more intense, because we were embarking on a new decade.

The Japanese believe that if you clean your house before New Year’s Day, you can begin on January 1 with a clean slate, without carrying any negativity from the past.

This idea runs deep, and if you have any outstanding debts or grudges… you should clear those up as well.

On New Year’s Eve, some Japanese go to a temple to attend the ringing of the New Year’s bell. Others tune in on the television, which broadcasts from a famous temple where the ceremony is taking place. When I first heard about it, I thought, Okay, here is something a little festive… bell ringing.

Wrong! The bell is rung 108 times, one for each worldly desire. Oh, you know…fun New Year’s Eve themes like dipsomania, gluttony, and lust. If you don’t know what dipsomania is, I bet you just looked it up! Kinda takes the kick out of the Dom Perignon toast and the cheese ball… not to mention later activities you had secretly hoped for.

Once the bell has stopped solemnly ringing, it is finally time to celebrate! Let me get that champagne glass. Wrong again… Japanese cook at midnight! You heard that right. They cook and eat noodles.

This soba is called “long life noodles.” The noodles are made from buckwheat, which can survive the harsh winter, so they symbolize strength and resiliency. Then, without further ado, the “celebration” is finished and… off to bed!

Although I still maintain many Western traditions in my own New Year’s Eve celebration, including champagne and music, I have embraced many of the Japanese New Year’s Eve customs.

The thought of a new year is exhilarating and joyous, but it is also a time for reflection and direction honing. As I cleaned my house this past New Year’s Eve, I cleaned my thoughts and got ready to make my Barefoot Writer dreams a reality. As I heard the solemn temple bells, I realized that I needed to let go of any negativity and focus on my goals with joy. As I ate the noodles, I thought that although life is sometimes hard, I have the strength to keep going toward my Barefoot Writer goals.

We have a greeting in Japan at the end of the year, loosely translated as, “Thank you for this year, and let’s work together again next year!”

Streamline Your Writing with the Hemingway Editor 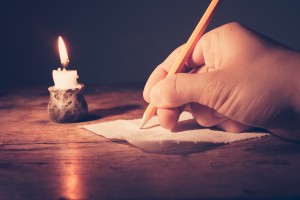