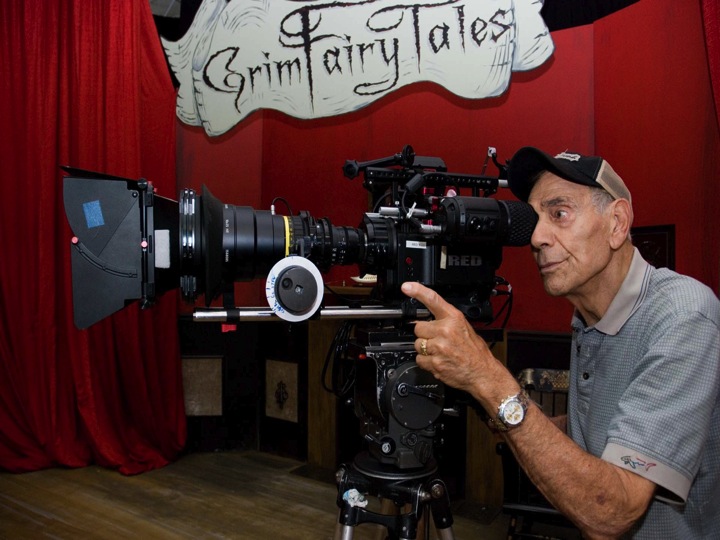 Herschell Gordon Lewis: Writing on the Back of an Elephant

Just down the South Florida coast from the American Writers & Artists Inc. offices lives one of the world’s premier direct response copywriters.

Over his 50-year career, Herschell Gordon Lewis has worked for hundreds of clients, including Omaha Steaks, Provide Commerce, The Wall Street Journal, Vita-Mix, St. Jude Children’s Research Hospital, Easter Seals, and Meals on Wheels, among many others. His copy has been used to sell computer software, natural health products, credit cards, nonprofit groups, private airplane maintenance, exotic travel … well, you get the idea.

He has written more than 30 books on marketing, advertising, and copywriting – including Creative Rules for the 21st Century and On the Art of Writing Copy. He spent 20 years teaching graduate students about mass communications at Roosevelt University in Chicago. He’s in the Direct Marketing Association Hall of Fame – where he’s also a featured speaker each year at the annual convention. And that’s just one of his dozen speaking engagements each year.

As if his storied copywriting and marketing career wasn’t enough, he also has a “side job” as a movie director/writer/producer specializing in “splatter films.”

With all that going on, he and his wife, Margo, are still dedicated world travelers. They spent six weeks in a villa in Provence recently and are headed to southern India in a few weeks to tour several tiger preserves.

Talk about a Barefoot Writer!

The Barefoot Writer visited Herschell in his home recently to talk about writing, what he’s working on now, how he lives the Barefoot Lifestyle, and what it’s like to take a client call from the back of an elephant.

How can you make sure your copy will shake your prospects hard enough?

Testing is the key. It keeps you from propounding your own prejudices again and again and again. And by that I mean, in marketing, you should never assume what the prospect wants or what advertising they will respond to – what will make them buy. You have to try different illustrations, headlines, and phrases to see what works. Sometimes the difference comes down to using just one word over another.

Word choice is key for you. And switching just one word, even italicizing one word, can change everything, right?

It can. And it happens all the time, especially in a short message.

Example: the word “submit,” as used by too many web marketers. Any writer who has been in our world for 20 minutes can offer a more positive word.

What else is old and tired these days?

Does testing ever bring results that just don’t seem possible … or logical?

That’s a tough one.

Yeah, it is a tough one. In pre-game voting, it was about 60 percent saying “start with the name and that will grab them.” About 40 percent of the marketing group felt ending with the name would force them to go into the message itself.

But that makes no difference. What matters is which one will pull the most response. Under battle conditions, one of those two examples pulled 8 percent better, which is a significant result.

Which one was it? Ending with the name. Now, who would have known that?

What use is that one test – can you learn anything from it?

Who would have known that if we hadn’t tested it? What did we prove? For that deal at that time, ending with the name pulled better. Can you draw a universal truth out of that?

No, but what you can draw out of that is enough of a truth to test it against something else. And that’s why I keep repeating that there’s no mystery to this business. It’s logic.

You write a lot for catalogs. Can newcomers break into this niche or are all the jobs taken?

In my opinion, catalog copy is the happiest of hunting grounds. The copy has to include just two elements – benefit and product specifics.

And there is plenty of room for newcomers. A copywriter searching for catalog clients should:

1) Examine the catalogs he or she encounters, looking for platitudes, non-specifics, and lack of salesmanship.

2) Rewrite two defective copy blocks and send them to the catalog’s director of marketing with the suggestion that the writer be assigned a handful of freelance assignments at a fixed rate per copy block.

I’ve heard you like to let your writing “breathe” for at least a day before you turn it in. How do you work that time into your packed schedule?

Number one, as far as my work schedule, I have no beginning and end. That is, I don’t care what time of day it is. I may be on the tennis court at 11:00 in the morning and on the computer at 11 o’clock at night. But that’s not my procedure. That will be that day.

A deadly approach when it comes to deadlines, which too many people do, is “Oh my God, I’d better get at this. It’s due in 10 minutes.” I try to avoid that. I try to get stuff done early enough so I can let it lie fallow for a day or so and I can then look at it with a jaundiced eye and say, “Oh my God, who wrote that?”

My flexible schedule allows me to do that.

That three-pound laptop of yours looks like it’s been around.

Whether I am in France or Sri Lanka or wherever, I have that little laptop with me. One time, we were sitting on an elephant in Sri Lanka, exploring. The phone rang.

The client said, “I take it you’re not in your office.”

“I can. It’ll be in your inbox on Thursday.”

That’s what I call working “remotely.”

That’s what The Barefoot Writer is all about. This career gives you that freedom to spend time with your family and do what you love. How does it feel to have been a Barefoot Writer your whole life?

I would have it no other way. I love the business in that respect because what the Web has done for people like me – and can do for your readers, all the other Barefoot Writers out there – is made it possible to do what I do, no matter where I am. And it really makes no difference.

People not only don’t know where I am, they don’t care. And that’s the kind of client I enjoy.

Speaking of perks … what are some of your favorite goodies from clients?

In golden times, each in-person consultation with Omaha Steaks resulted in an incredibly tasty chateaubriand delivered to my home.

Writers should be readers, right? What are some must-haves for a Barefoot Writer’s bookshelf?

Well, my list is eclectic. MUST reading for writers: Strunk & White, The Elements of Style, plus some old but invaluable guide- books – Claude Hopkins, Scientific Advertising … Rosser Reeves, Reality in Advertising, and this one by David Ogilvy, Confessions of an Advertising Man.

I also recommend some of mine, naturally.

Writers should know how readers in general – and book-readers have far more buying power than the public at large – view contemporary society. I suggest recently published books by social commentators such as Thomas Friedman, like The World is Flat.

Is there one piece of copy that stands out for you from all your time in the business?

It’s ancient. It was back at Calhoun’s Collector’s Society when I was still struggling for recognition as a copywriter worth hiring. It was a company that sold porcelain collector plates with pictures of historical figures, Biblical scenes, and more on them.

My wife, Margo, was in charge of product development. And we had an idea for a plate. The subject was the five senses. Being a copywriter, I converted that somewhat bland subject to the five perceptions of Weo Cho for an ad. He was a Chinese philosopher. And this thing pulled the walls down as far as sales.

I’ve never had anything as instantly successful. They couldn’t make these plates fast enough.

It’s always exhilarating when something that you have written does well.

You’re a copywriter… but you’re a horror filmmaker too. How does that happen?

I was writing copy at the time for a direct mail agency in Chicago called Morlock. I was also partner in a TV studio. My partner, Marty Schmidhofer, and I shot commercials for local businesses.

At Morlock, I was doing great. But things were tough at the studio. To compete with commercial studios in California, we bought thirty-five-millimeter movie equipment, which was the latest thing. The Chicago ad agencies still went to California to shoot their commercials. And one day, I was complaining to somebody I really didn’t know well.

“Well, how do you make any money in your business?” he asked me.

“The only way to make any money is to shoot features.”

“Well, why don’t you shoot features?”

That’s like saying, “Why aren’t you rich?” But that planted a seed. So I figured, “Okay.” I put a deal together. Every friend I had, we all invested, and we made a feature.

It was a total disaster. But you see, by that time. I was infected. Making movies is like having malaria. You think you’re cured, but it’s lurking in there, and it could suddenly erupt.

But that’s how it started. It’s too long a chain to get into, but … Blood Feast was the first, what I called “gore” movie – they now call them “splatter films.” But that’s why they call me the Godfather of Gore.

Oh, I don’t want it on my epitaph, but I don’t object to it.

You know, of all the freelance writers I talk to, it always seems to be a career that comes about in a roundabout way. Does that describe your life?

Well, I don’t mind going around a corner or on a detour, provided it looks exciting … or profitable. And if it’s both exciting and profitable, it doesn’t get any better than that.

The Importance of Setting S.M.A.R.T. Goals to Avoid Burnout and Catapult You to Success

Should I Use a Pseudonym as a Writer? Some Helpful Hints

Half-Shaven, Brooding, and Other Writer Stereotypes – Are They for Real?